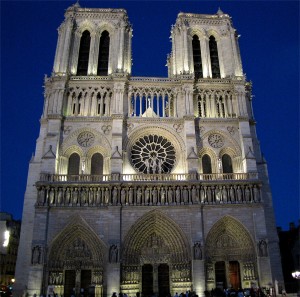 No other building is as associated with the history of France as Cathedral Notre Dame de Paris. The pope of Alexander III was the person who placed the first foundation stone in the year of 1163. He was also the first person who marked the beginning of 170 years of hard work for the gothic architects and the medieval craftsmen.

Notre Dame de Paris is a gothic masterpiece, built at the place of a former Roman temple. The magnificent interior becomes obvious as soon as you enter the cathedral. The works of the medieval most prominent sculptures decorates this building.

In this majestic surroundings they crowned the kings and the emperors and blessed the royal knights. But Notre Dame was also the place of chaos and confusion, where the revolutionaries plundered it and forbid the religion. They transformed it to a place of worship for the “Sense” and used the place to store wine. Napoleon Bonaparte reintroduced the religion in 1804 and Notre Dame was restored by the architecture Viollet Le Duc who among other things put back the missing statues.

The interior of the cathedral is open every day from 7:45 AM to 6:45 PM. Is also worth mentioning that the admission is free except from a small museum of relics and religious items which is located within the cathedral.