Monuments of Paris Comments Off on Palace of Versailles

The Palace of Versailles and the awesome gardens and building surrounding this palace are well worth a daytrip visit. The Château de Versailles was the royal palace outside the gates of the village of Versailles, suburb of Paris.

Palace of Versailles was the historical and official residence of the French Kings, from 1682 when King Louis XIV 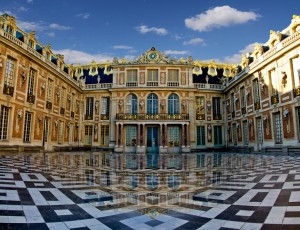 decided to move from Paris until the royal family was forced to return in 1789.

This royal palace became the home of the French nobility and was the location of the royal court under the Ancien Régime. It was initially a hunting lodge which was expanded in rounds by Louis XIV. He was supposed to use the lodge for his amorous trysts with the lovely Louise de la Valliere.

Seeing that Château de Versailles was grandiose and luxurious it was expensive to maintain. It has been recent estimates that the cost to maintaining Versailles, including staff and royal family, was as much as 6 percent of the government income of France.

The palace is open all days except Mondays from 9:30 AM to 17:30 PM and even longer at the summer months. The cost of admission is about €8 and you could choose to pay an extra of €5 to get a guided tour.